The hotel in Gosport was quite noisy, at least up till 22:00. Every 20 minutes emergency vehicles sirens could be heard close-by, passing through a set of traffic lights, on consulting a map I could see that that an Urgent Treatment Centre was just down the road. I still managed to get a good nights sleep though.

The weather for most of the early morning would be off and on drizzle and light rain. I was up and away quite early even though I would end today’s just 4 miles away from my hotel.

I drove to Lee-on-Solent and parked up on the sea front which offered free parking. I then caught the 7:07 #x5 bus to Fareham railway station, then the 7:40 train for the short distance to Portchester. I headed south through the town towards Portchester Castle which sits on the shoreline of Portsmouth Harbour. I did make an attempt to follow a footpath marked on the map, but after 30m the overgrown vegetation totally blocked the path, with nettles stinging my legs even though I was wearing trousers. The worst bit however, was the numerous Dog Roses which have vicious barbed thorns, which I know from experience (they are in my garden at home) can do a lot of damage to clothing and skin!

I walked around the walls of Portchester Castle which are in fact the outer walls of the Roman Fort – Portus Adurni. The castle was probably built in the late 11th century and has hadmany uses and owners in its long history. I followed the shoreline path towards Camas Bay and the Wallington River. The rain started to increase as I rounded the Cams Hall Golf Club and I soon arrived on A27 to cross over the Wallington  and pass under the railway viaduct.

Unfortunately, the next 4.5 miles were predominantly along the main road into Gosport, with just a single short stretch of footpath briefly touching the shoreline of Portsmouth Harbour. When I reached Priddy’s Yard I was able to look across to the Naval Dockyard in Portsmouth across Portsmouth Harbour. I was greeted by the amazing sight of the recently built aircraft carrier HMS Prince of Wales, an Elizabeth-Class carrier and sister to HMS Queen Elizabeth – now on active service. I had never seen an aircraft in the flesh before so this was a real privilege. Alongside the carrier was a replenishment tanker RFA(royal Fleet Auxiliary) Tidesurge. 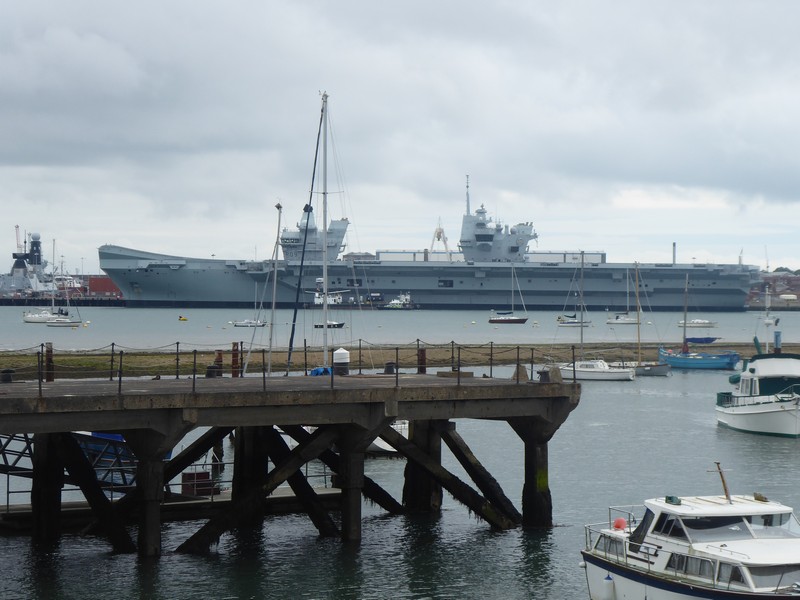 r Foxton Lake by a footbridge. A mile of street walking brought me to the terminal for the Gosport to Portsmouth ferry service. I headed south west out of Gosport walking alongside the huge marina at Haslar. I crossed over the Haslar Bridge and could make out the black shape of HMS Alliance, a submarine now on display at the Royal Navy Submarine Museum. HMS Alliance was first built in 1945 and continued in active service up until 1981.

I continued SW out of the built up areaand  passed Fort Monckton and on to Gilkicker Point where I was able to walk around the boarded up Fort Gilkicker, one of the Palmerston Forts from 1863 and currently owned by Hampshire County Council, but in a very poor state of repair. I continued along the coastline towards Browndown. This area had along history of military use and appears it is still used for military training. The Solent Way is marked as going around the site, so I also followed the road into Lee-on-Solent. It was good to arrive back at my car, as although the walk was slightly shorter today it was tougher than yesterdays walk.

One thought on “355. Portchester to Lee-on-Solent”

This site uses Akismet to reduce spam. Learn how your comment data is processed.